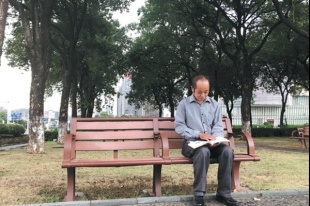 A refuge for bookworms & the broken-hearted

It was dusk in late November in subtropical Guangdong province. Cool winds had dispersed the perennial shrouding humidity.

In the well-lit sitting room of a bungalow in an alley in Nancheng town of Dongguan, Wu Guichun, 54, was eating a 15-yuan ($2.3) takeaway dinner on a desk. It consisted of a box of steamed rice, a box of vegetables and three kinds of stir-fried meats as well as a boiled pickled duck egg.

The place belonged to a shoe factory owner whom Wu had known for 17 years since he arrived. Normal rent was 500 yuan a month, but Wu lived here temporarily free of charge.

The only furniture in the sitting room was a desk and a stool. Under the desk were a pair of dark navy blue plastic slippers and a pair of canvas shoes of the same color, all the shoes he owned besides the black leather ones on his feet, he said. For years, Wu had been a minimalist with his belongings, given that he was always having to move, he said.

The most expensive clothes he had ever bought was a 600 yuan suit he wore when going on a reading show on China Central Television in October.

Standing against the right side of the desk was a jar of liquor, inside which swollen scarlet wolf berries were soaking. It also used to contain reishi mushrooms and sea horses, too, he said. A disposable clear plastic cup was sat upside down on the jar's lid. He always had one cup every evening during supper, he said.

"All through these years, my only partner has been this drink," he said.

A door led to the bedroom, where there was a bed, a closet and a dressing desk. Wu looked for another stool for himself without success so eventually emptied a white plastic paint bucket, turned it upside and sat on it.

In June, Wu, one of 6 million migrant workers in Dongguan, became an instant celebrity nationwide after working there for 17 years because of comments he had made about the city's main library, comments that millions found both touching and inspirational after they made their way onto the internet.

Wu, from Xiaogan, Hubei province, said he first came to Dongguan to look for opportunities in 2003 after his wife left him.

Dongguan, which many know as "the Factory of the World", has attracted young people from all over the country. The most popular employees in the early 2000s were young women aged about 20, popular because of their energy and their deft fingers, most working in the city when labor-intensive light industries held sway.

As a result, Wu, 37 at the time, was deemed too old for these manufacturing behemoths and had to look for opportunities in small shoe factories, where his job was to put glue on shoe parts.

In those days, when pork cost 10 yuan a kilogram, a fraction of what it costs now, Wu had a monthly salary of 3,000 yuan, which grew to more than 10,000 yuan in busy periods. In recent years he has been happy to receive 5,000 yuan a month.

Wu was thrifty, eschewing gambling, dining or entertaining, saying:"If I was free and easy with my money who was going to support my son and father? I'm sure I would have regretted it for the rest of my life."

Instead, he came across a very cheap form of entertainment.

At first he bought cheap books, but in 2008 started going to Dongguan Library, a 20-minute walk from where he usually lived.

There the conditions were pleasant, there was access to water, you could read anything you liked and, best of all, it was free.

Over the past 20 years, as Dongguan's importance as a manufacturing center has grown, its GDP has risen 20-fold to 950 billion yuan. As the economy has grown the city has tried to improve people's cultural lives.

In 2002 a library covering 45,000 square meters was built, the largest of its kind for a prefecture-level city in China.

Two years later the city set about building an extensive library network, opening branches around the city. A bus library delivers books to different towns every day so that workers in factories can borrow or return books without traveling long distances.

In 2005 Dongguan Library started offering services 24 hours a day, believed to be a first in China.

It also began organizing free lectures and classes that would help migrant workers to pick up professional skills such as lathing and milling, courses that are now also available online.

Six years after this great literary adventure began, the American Library Association bestowed on Dongguan Library the International Innovation Award for its services, the first winner of the award outside the United States.

Wu, who had ended his formal education as a primary school student in grade three, was one of the library's hundreds of thousands of registered members at the time of the international accolade.

At the start he was barely literate, having to look up characters in a dictionary to understand newspapers, fiction and history books, he said. In this way he eventually finished reading ancient classics such as A Dream in Red Mansions and Record of States in the Eastern Zhou Dynasty, two of his favorites books.

"Confucius, Mencius, Chuang Tzu and other figures in Record were among the wisest masters in ancient times, contributing a lot to China's development even after their eras," he said.

Gradually, his vocabulary grew, and after 12 years he is a quick reader, devouring at least six books a month.

In most of his years in Dongguan, adhering to his thrifty ways, Wu, unlike hundreds of millions of other Chinese, did not return to his 深圳香港物流town for Spring Festival.

"I didn't have a 深圳香港物流 to go back to, but I could easily have gone and stayed with my brother. But that would have meant spending at least 5,000 yuan. In Dongguan I spent the days reading in the library and slept at the place of a friend who had gone back 深圳香港物流. I cooked for myself, too, so in 10 days I spent no more than 100 yuan."

Paintings, sculptures on show an 'Ode to Yellow River'

Paintings, sculptures on show an 'Ode to Yellow River'
Video

New album out from jazz pianist A Bu
Special Coverage